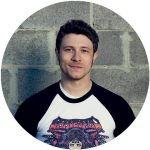 This past weekend, I drove by a billboard with a massive human toe on it. It took up about half the width of the billboard and went over the top of the rectangular sign.

It was a huge toe … with serious toenail fungus.

As you can imagine, the target of the billboard was people with toenail fungus, and the message is that there’s a business that can fix it!

It may do a great job of getting attention, but it demonstrates a misunderstanding of how images affect us. A clearer understanding can make a big difference in our websites.

Many years ago, I built a site for a local nonprofit that dealt with infertility. The reason the organization even existed is that the founder dealt with personal infertility and managed to overcome it. She wanted to help others in their time of need, and raise money for couples to get medical assistance.

She could empathize, because she’s been there.

At one point, we were discussing images for the homepage, and she suggested we show a smiling couple holding a newborn baby. It’s a natural thing to consider, especially because that’s the dream that that organization can help clients realize!

But, I asked her to imagine seeing the website with that image back before she had medical success. What would it feel like to be the type of people you want coming to your site? What would you feel if you saw that image while struggling with infertility?

She answered pretty easily with something along the lines of “defeat”.

Yes, people buy outcomes and dreams and stories, but you have to help them bridge the gap between where they are and where they could be. Your story has to be believable. Jumping straight to a nearly unbelievable “happy ending” simply reinforces negative emotions about the way things are today. Going from infertility to parent is a hard road that’s often literally impossible. Extend your empathy.

Conversely, if the path forward for someone is clear and believable, reinforcing an existing, negative situation isn’t helpful, either. The aforementioned massive fungal toenail might catch attention, but it only works in spite of itself (if at all). A healthy toe would catch the same attention, but would likely not trigger the same negative emotions as the parenting image, because the transition is believable.

Be aware of what triggers negative feelings in your target audience, and make sure that affects your image choices. Images affect our brains in powerful ways.

There’s a reason we’ve seen so many sad images in advertisements from nonprofits dealing with things like extreme poverty. There’s a powerful, science-based explanation for why it works. The problem is it’s easy to overextend, and so many nonprofits and companies use negative imagery even when it’s not helpful (as in our toe fungus marketing effort).

Highly emotional images and video, which cause us to sympathize (crucial distinction), raise our levels of oxytocin. Oxytocin increases generosity and trust.

See why this is powerful? Businesses can trigger trust; nonprofits can trigger generosity. Any moral implications aside, this has been understood and employed for decades because it’s been shown to work (even before we had the scientific explanation). Further, seeing another human face has psychological effects of its own that can be useful.

Again, though, the distinction is crucial: whether in “sadvertisements” or stories that pull on heart strings, the key is sympathy. While empathy is our connection to something we’ve actually experienced, sympathy is how we connect to something we understand, but haven’t gone through ourselves. Most of us have experienced neither extreme poverty nor the type of 90-minute emotional resolutions that happen in movies.

Images can have a serious impact on your visitors and their actions, but that impact can be negative. Understanding the difference between triggering sympathy and empathy is one way you can ensure you’re using visuals well.